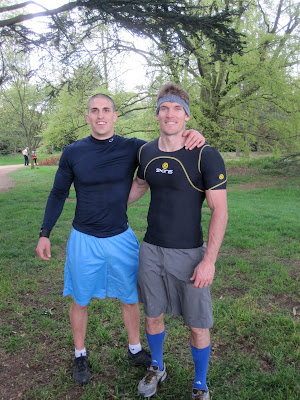 My boy John got here yesterday afternoon, much to my delight. Not only is he a badass firefighter, a ton of fun to be around, and an seriously high quality guy, but he is as “down for whatever” as you could ever want in a workout partner. It’s a nice bit of timing that he’s coming to visit now with just 2 weeks left until the regional qualifiers.

Today we went to over the University Park and brought the rope and rings in hopes of finding a tree big enough to support the both. No problem there. There are some of the most beautiful and accessible trees I’ve seen in Europe scattered around this park, and, even though we eventually were instructed that they were protected from climbing, hanging things, etc, we found a couple to support the WOD quite nicely. I went first and felt great on the climbs and the squats all the way through. The biggest killer were the dips, surprisingly. Squatting with someone on your back requires a lot more from your shoulders than squatting with a bar and I think this took its toll when I got to the rings. The first set was unbroken, the second took 3 sets, and from there on it was 5 or more to get all 20 done. I finished in 13 minutes.

John took his shot at it next and shot up the rope without using his legs at all the first set. This would prove a little costly, as his arms gassed quickly by set #2. I tried to coach him on the art of using your feet as you climb, but doing so in the middle of the workout was pretty tough. He muscled his way through and pounded the squats and dips in the same pattern as I did, finishing in 17 minutes when all was said and done.

This is likely just the first in a line of great workouts we will be doing over the next 10 days so I’m really excited. Getting to London once more, out to Royal Air Force MIldenhall on Wednesday, and then up to Scotland next weekend. Come on!