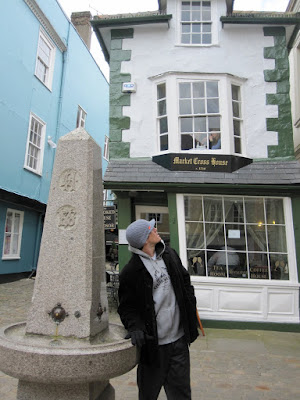 Even after taking yesterday off to rest, I was feeling stiff this morning. My quads and ass especially. I also felt a general soreness in my shoulders, but nothing big. Still, I was excited to get back outside and build on the momentum I created Tuesday.

The morning workout was designed to be long, mentally grueling, and to challenge the cardio vascular conditioning that I’ve neglected in Paris. Just down stream from the Bourne End bridge there’s an open farm plot with telephone poles dotting down it’s center spaced just under 100 meters apart. This was my spot.

The first run around the perimeter felt great. I kept my pace under a 7 minute mile (with the exception of the couple mud puddles I had to navigate) and I got back to my starting point in 5:15. I used the same log I had the other night for the OH squats for the weighted carry today. It felt light. Definitely had a Rocky moment running with it across my back through the field, only my field wasn’t covered in snow. The second run was a little tougher, but not too bad. By the third I was wishing I hadn’t set out to do 5 rounds, but I pressed on only dropping my pace a little bit. The weighted runs never really got hard, to be honest. This has to be thanks to all the sandbag stuff I’ve been doing the past 6 months. Surprisingly, it’s much easier to handle the huge log than it is the lighter sandbag.

The 4th and 5th rounds were gut checks. I tried to pick up my pace on the home stretch and dropped the log with the clock reading 30:19. I had set 30:00 as a goal after I saw the time on my first leg, so I was a little pissed I had come so close. This was still a cool twist on doing a distance run and I recommend people give it a try. Next time I will pick a location with some hills for the running portion.

The evening session took place at CrossFit Central London, the city’s first and largest CrossFit affiliate. Brian, the gym owner, had invited me in months back and today was the day to take him up on his hospitality. I went in to the city around 2 to do some sightseeing. No pictures though, because my camera has failed me yet again. Sadness. I walked around the town, saw the standard sights, was super impressed with the Parliament building even though I’d seen it a million times in movies and on television, and made my way over to CCL by 6 pm. The location is beyond perfect, in my opinion. On the south bank in the old city of Southwark, CCL is tucked in a converted arch of the railroad line passing overtop. The address actually reads: Arch 57. Not kidding. Apparently the railroad company decided the space was too valuable to go to waste and converted about a dozen of these arches into storage facilities for rent. Down the row there’s a boxing gym, an Astin Martin dealership, and a custom framer.

The interior is tall and huge. They’ve actually taken up two arches, giving them (by my estimate) around 2000 square feet of usable space. At the moment they’re only using half of it at comfortably supporting 50 regular members. Tonight I was training alongside 12 other people and didn’t feel crowded in the least. These guys have a great situation here. I’m jealous.

The Workout of the Day called for heavy front squats followed by a short metcon. Perfect. I hadn’t done any heavy in what felt like forever so I was excited to see those front squats. By sets looked like this: 100 kg x 3, 110 kg x 3, 120 kg x 3, 130 kg x 3, and 135 kg x 2. Barely got the second repetition on the 135 and thought better of attempting the 3rd. Had no chance of getting another. Pretty happy with this result considering the morning’s activities. I don’t remember any previous numbers for a 3RM, but I’m sure this is my best. I think my best 1RM might have been 135 kg before, so tonight wasn’t bad at all. This is my chief weakness when it comes to cleans and I don’t do it enough. But it felt good to see the numbers going up anyways.

The metcon, 3 round for time of 12 ground to overhead (40 kg), 15 pullups, and 21 kb swings (32 kg), I was excited about. I knew the limiting factor would be the grip, something that tends to be an Achilles heal of mine from time to time. The prescribed weight for the kb swings was actually 24 kg, but we ran out of kettlebells. I was happy to bump it up, remembering all too well the way the 32 kg bell crushed me in Copenhagen 2 months ago. I started off snatching the ground to overheads—felt super light. The pullups went quick as well. The swings felt heavy from the start. I didn’t break the set, but I knew that I would have to in the rounds to follow. I picked the bar up for the 2nd round of GTO’s and it was like someone slipped an extra 50 pounds on there when I wasn’t looking. Where the first set I had really just been flipping it up with my wrists, this set I was power snatching it with my entire body. The pullups I broke after 8 and finished in two go’s. The swings were tough but not unbearable. I did them in 3 sets of 7. The last set of GTO’s I did clean and jerks instead of snatches, and broke the pullups in 5’s. Coming in to the last 21 swings I knew it was going to be rough. My forearms were exploding and the grip was starting to go. It took me 5 sets to get to 21, with a final time of 6:52.

I feel great about today overall. I pushed myself hard and got a lot out of being in a group setting again. Hoping to see these guys again tomorrow night if I can get myself back into the city.