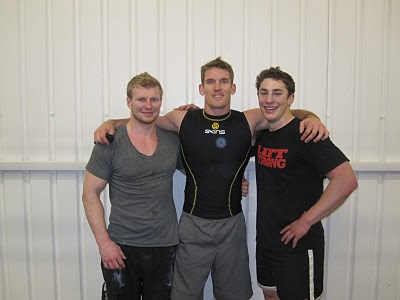 So I have been waiting over a week for my BritRail train pass to come in the mail, but have been dealing with issue after issue with the courier service. Finally, this morning, the representative agreed to let me come pick up a duplicate from her office in London. This meant I was going back to the city and I figured I might as well drop in to CrossFit Central London for some heavy Olympic lifting. So I sent a quick message over to Dell and Rob, my training partners from the other night, and we agreed to meet over there at 5 pm. With the gym practically to ourselves and the video camera as an aid, we went about establishing 1RM’s.

I warmed up with 40, 50, and 60 kg for sets of 3, then did a single at 80 kg. Felt good, so I bumped it to 90 kg. Hit it first try with ease. Decided to go straight to 100 kg, my PR and a weight I hadn’t hit since moving to Europe. Stuck it first attempt. REALLY fired up at this point. Then I proceeded to attempt and miss 105 kg 6 consecutive times, getting it halfway up one time before losing it left. This was frustrating, but encouraging. Until the last few sets, the weight didn’t feel too heavy, I was just missing it by a few inches. Anyways, going into regional qualifiers having matched my PR’s in both Olympic lifts within the last month, things could certainly be worse.

To make things even better, Rob and Dell each improved their lifts as well. Rob’s technique looked amazing, just a few little wobbles in the bottom of the squat caused him to miss reps at 80kg. Next time he attempts, I’m sure he will get it. Dell is like a spring off the ground and has seriously raw power. He power snatched 70 kg (almost a muscle snatch), and just needs to get comfortable diving under the bar to get much higher numbers.

We set off on the metcon without a clock because it was being used for the class happening around us. Even after the heavy snatches I was most interested in how I would do with the handstand pushups. Answer: not bad. The first set I felt strong and got 4 + 1. Everything from there was singles due to the fatigue of the other exercises, but I only missed one attempt the entire time.

The full range pullups with full range toes to bar were the toughest bit. CCL has a monkey bar setup that we used to pull our heads between until our shoulders hit the bars. Then, from a full hang without kipping, we lifted the feet all the way beyond our heads (almost like a skin the cat) before beginning the second repetition. Definitely wears the arms out fast but a great challenge on the core as well, and almost therapeutic after all the heavy hip extension we had just done.

The last bit was a variation I’ve been wanting to try for a while. Hitting the ground like a standard burpee, then log rolling left before pushing up and clapping. Back down, rolling right, then jumping and clapping. This required more coordination, more arm strength, and more time than regular burpees. The heartrate didn’t jack up as quickly, but it was a good way to get out of the sagital plane of motion that we so often get trapped in.

Overall this was an excellent session with tons of positive points to carry forward. My next few days will be a bit wild as I’m heading to Manchester Tuesday/Wednesday, then to Iceland from Thursday to Monday. It’s a hell of a 7 days so stay tuned.