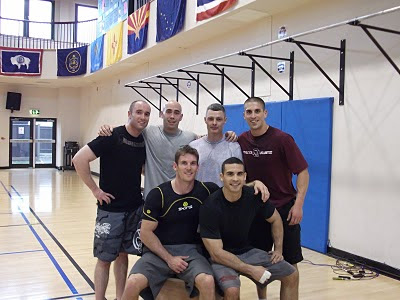 John and I got out early and headed east towards Cambridge for our appointment with the guys at Royal Air Force Mildenhall. Arriving in Cambridge a few hours before we were set to meet up with Mike, we decided to rent a pair of bikes and cruise around town. Awesome idea. For 8 pounds we were side by side on purple street cruisers weaving in and out of traffic through downtown Cambridge, which is, incidentally, beautiful. We grabbed lunch, walked around, and largely just relaxed before heading back to the station.

We met Mike at the Newmarket train stop a little after 3 pm and drove over to the base where Rob, Justice, Matt, and the rest of the crew were waiting for us. We got everything set up at one end of the base’s enormous basketball court where a 25 foot wall mounted pullup bar made its home. There were targets for the wall balls and boxes with 45 lb weights on top. Things were dialed in.

To start it off we worked some Olympic lifts in the adjacent globo-style base gym. Hexagonal plates aside, it felt good to lift some heavy weights. We worked through some technical aspects of the movements and made a couple of tries at big numbers. I missed 3 attempts at 215 before calling it a day. Rob practically power snatched 185 for a PR, and John got 135 in his 3rd snatch session ever. But the metcon was still the main item on the agenda so that’s where our primary focus was.

Testing my ankles out on the double unders and box jumps was not promising. The down portion of the box jump was especially uncomfortable as the joint tried to absorb and rebound all in one motion. Luckily, Rob located some athletic tape that I used for an impromptu tape job that helped a ton confidence-wise. I figured I would just take it as it came and be careful with the box jumps.

There were 6 of us going for it, making the atmosphere competition like. The double unders went fast, without breaks for both John and I. The box jumps were awkward and I could feel my right leg taking most of the force on the way down. I wasn’t bouncing directly back up in an effort to limit the jamming action, but I think this just made things worse. Heading to the wall balls I felt okay and knocked out the 30 without dropping the ball at all. I had opened a little space between John and I by this point but not much. I did 20 pullups unbroken, rested a few, then did the last 10. Really felt good on these. I’ve been just feeling better and better when it comes to pullups in WODs, which I couldn’t be happier about. The second round felt better on the jumps as things had started to warm up, worse on the wall balls, and by the pullups I was sucking gas. After 10 butterflies I transitioned to standard kipping and felt much stronger. This was the way I went for the remainder. The 3 round was strictly mental. Physically I was tired, but not crushed—I just had to keep going. I did, getting to the 18th pullup before ripping a callas on my left hand. PISSED. Really hate when this happens and so close to the end. I finished the repetitions and went through the double unders in 2 sets, stopping the clock at 12:59.

This was a great workout with some great guys. Afterwards, John and I joined Rob and Mike for some great grub at a local spot off base before grabbing the train back home. Being on the base was a ton of fun and I can’t thank everyone enough for being so welcoming. I’m looking forward to seeing them again in a few weeks in Sweden.

Tomorrow is for schoolwork, maybe a swim, then off to Newcastle and Scotland on Friday. Coming for you J Mull.

Posted by anywherefit at 1:02 AM