Out in the Country 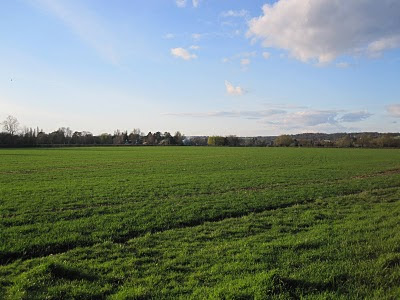 4 rounds for time, rest as needed between rounds:

I took the train from Oxford to Charlbury today to visit my friends from DC, Robin and Taryn. Robin’s family still lives here in England and they were nice enough to have me over for the day. We went hiking through the valley, ate lunch at a pub/hotel that’s been around for 900 years, and enjoyed the still inexplicably gorgeous English weather.

Round about 3:30 we decided it was time to sweat. Robin’s dad had a new Mercedes Benz wagon that looked tasty enough, so we wheeled it down the driveway, around the corner, and onto the stretch of unused road that bordered the pasture. It was flat, straight, and long, read: must be used to push cars. I walked off a distance of 100 meters (looking for a nice round number to sprint), putting a bag at one end and the log we would use for the shoulder to overheads at the other. The first round was a little hesitant, wanting to check the ankles, the potholes, and the degree of difficulty. The sprint didn’t feel too tough, but the overheads required a lot more air than I thought. By the end I was out of breath and the clock read 1:32. Robin went next, using an open hatch technique for his sprint to get lower and finished in 1:32 as well. My second set I was moving the car much faster. The ankles felt good and I was confident in the footing so I let it out, finishing the circuit in 1:25. The aftermath was worse, obviously, as I could feel my lungs burning and my mouth really drying out. My third round time was 1:29 and finished with wobbly legs and a burning stomach. The lunch we ate at the pub was threatening to come up (ham, eggs, fries, and soup wanted their revenge). The last round felt different. I definitely didn’t have the same juice as the first 3, meaning I had reached a point physically where I could no longer fully recover in the time it took Robin to do his turn. Still, I went with what I had and busted ass down the road. I had trouble getting the log up to my chest, wasting a handful of seconds struggling with it. Wound up finishing in 1:36 and was spent, dizzy, and jellied. Great work.

We made our way back up to the house and chilled for 30 minutes or so before going to the lawn to play around with hand balancing and core control. Robin showed me an exercise he learned from Jim Bathurst (our mutual good buddy from DC who runs Beastskills.com) where you raise into a headstand with hands as supports, then lower your knees back to your elbows before fully extending again at the top. The object is to do several in a row and control the movement fully and slowly. Definitely a challenge and so much fun. We were getting them, missing them, stringing a few together, then falling over in heaps. Taryn got some great pictures that I will hopefully have my hands on by the weekend.

I forgot my camera so no video from today unfortunately. Tomorrow I head into London to meet up with Dell for a WOD on the Tower Bridge, then swinging to CrossFit Thames in the evening. Hopefully with Oly shoes in tow.

Posted by anywherefit at 9:46 PM