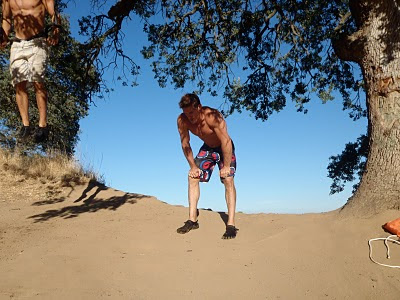 It doesn’t care about circumstances, timing, or convenience. You’re either up to the challenge or you aren’t.

During three years of personal training in Washington D.C., I had the privilege to meet and engage with people seeking fitness from all walks of life. I listened to their goals, taught them the skills they would need to achieve them, and did my best to help meet and overcome each inevitable hurdle. During the course of these interactions and experiences I heard a million reasons why goals weren’t reached or why hurdles were too high. But no justification, no matter how convincing or true, ever transformed failure into success. No task, whatever it may be, will ever make itself easier to overcome because you are tired, sick, or haven’t had your coffee. This is fitness’s beautiful simplicity. You either lift the weight or you don’t. You get yourself to shore or you drown. Almost doesn’t count.

In many cases this kind of impartiality can be ruthless, but it is always fair. Growing up playing football and baseball I was exposed to kids from good families, bad families, rich families, poor families, families with dogs or cats or birds or whatever. The best part of any sport I ever played was that I wasn’t any of those things when I was on the field and neither were they. In that moment we were nothing but our ability or inability to perform.

Unfortunately, this brand of abject fairness doesn’t sit well with those that don’t get it done. Rather than acknowledging failure, finding their flaw, and working towards improving it, the vast majority of kids looked outwards and instead found an external excuse for their incompetence. Call it immature, irresponsible, or whatever, but it is the same in society at large. People blame violence on the influence of video games and popular music. Someone’s kid hurts himself jumping out of a tree and the city is up in arms to chop that tree down. Gone are the days where individuals are held responsible for the risks they take and the decisions they make and it’s creating the biggest and most dangerous epidemic facing the world: that of non-accountability.

Take obesity. There are plenty of medical explanations for why someone is obese and can’t lose weight: over-active thyroid, low bone density, slow metabolism, poor nutrition, previous injury, diabetes, psychological distress…the list goes on. One or all of these could be absolutely true in any given situation and I sympathize with the person fighting to overcome them. But the harsh, impartial truth is that finding a reason for your obesity doesn’t make you any less fat. I promise you, gravity isn’t going to feel sorry for your plight and decide to stop pulling. Yet so often this seems to be what people expect. They resign themselves to the status quo and deem it acceptable because some white coat wrote them a prescription. Their explanation becomes a psychological crutch that cannot be scrapped.

Even more blind are those who blame society for their shortcomings. How many times have you heard or read criticisms of the fast food industry’s corporate greed and deceptive advertising campaigns? As if the individual played no part in shoving that Big Mac and supersize order of fries in his face. The reason McDonald’s is a multi-billion dollar a year business is because people choose to eat there. It’s convenient, it’s cheap, and it tastes good. It also offers very limited nutritional benefit beyond hypertension, obesity, and heart disease. The choice is straightforward and stark, but people get it wrong everyday because they think a good justification is the same thing as a good decision.

I used to wonder how many people could use busyness as an excuse for not exercising. No joke, I heard it at least 6 times a week during personal training sessions and every time it was the sincerest plea. “I’ve been swamped at work,” or “Things have just been crazy lately.” You mean people have to work for a living and sometimes that makes them tired and tight on time? Never heard of such a thing. Things are always about to “calm down” or “lighten up.” Such excuses are the purest form of psychological masterbation. They do absolutely nothing to break the barriers between you and your goals, but, rather, serve only to make you feel better about not reaching them.

I love fitness because it’s a results based pursuit, the purest form of meritocracy. You set goals and you reach them. Or you don’t. No list of excuses will ever change the fact that you didn’t make the time, lose the weight, or prevent the heart attack. SO STOP MAKING THEM. Some people have it harder than others, I grant you. Tough shit. The mirror doesn’t care and neither do I. If the individual reaps the benefit, then so too must he shoulder the burden. Whatever the challenge, just get it done.