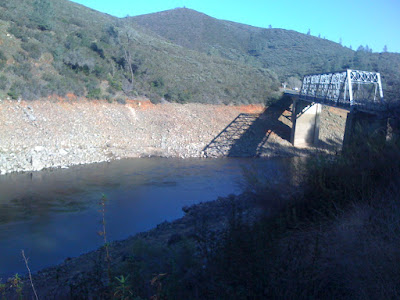 Without a GPS it’s hard to say exactly how far I made it on this little adventure, but judging by Google Maps and what I felt my pace was, I ran about 3 miles. The terrain was semi-technical with lots of rocky footing and creeks to jump over, but the elevation was manageable. There was really only one major climb and it happened right at the beginning. The rest of the way was small ups and downs that my legs were able to handle without too much trouble. The only thing that really gave issue was my lower back. This is not uncommon when one isn’t used to running fast for long stretches—hint…run fast for long stretches more often.

Starting at the Salmon Falls bridge, this trail cuts its way along the northern edge of Folsom Lake’s eastern tributary and follows the waterline back and forth around the entire lake. The particular section of the trail I like to run is populated mostly by mountain bikers. I was racing them, dodging them, and giving way to them throughout the run but it wasn’t as annoying as it might sound. You actually have to be impressed by these people—some parts of the route were hairy enough on foot let alone thundering down on two wheels. I was a little jealous of them when 20 minutes hit because I had just come upon the most beautiful section of the trail (a place I’d never seen until this point). If I had been on bike I could have kept riding and explored much further without having to worry about how long it would take me to get back to the car. As it stood, 20 minutes of hard running would equal at least 40 minutes of jogging/walking to retrace my steps and that was quite enough already.

Congrats again to Andrew for winning the Steelfit Pullup Challenge. Your bar is on it’s way.

Posted by anywherefit at 6:28 PM