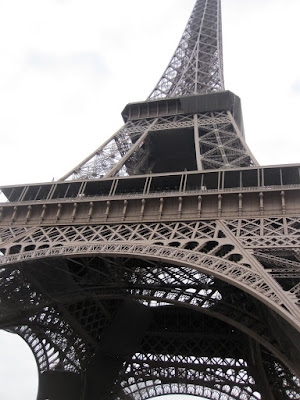 Today’s mountain was the Eiffel Tower (at least the portion they allow you to climb on foot). Niels joined me at the colossal monument at 9am as we prepared to do battle with two things undeniably French: the Tower, and bureaucracy. Only 2 of the pillars were open, and only one for the stairs. Yet the dude working the gate didn’t seem to know this fact, because he kept sending us to other windows to try and acquire tickets. Idiot. Finally a woman who had her shit together came around and we were able to get started.

I was carrying my backpack because my Thursday class was set to start at 11:00 and I wouldn’t have time to go home in between. This probably only added 5 kg, so not a huge deal. What was a huge deal, was the number of steps, and their vertical clearance. Compared to the 281 steps we climbed in Montematre a few weeks ago, the Eiffel Tower was sporting giant strider stairs. 600 of them. Every step was uniform and every step was around 15 inches of clearance. The net effect of this was that my legs wore out almost immediately skipping steps. Going in, I had aspirations of being able to run all the way to the top without having to walk. HA. Hilarious in retrospect. I didn’t even make it to the first deck without breaking stride (approximately half way between the ground and second deck).

The other issue is that these are tight stairwells with little to no break between flights. This means the lactic acid continues to build with no time for your muscles to relax. If someone can make it to the second viewing deck without having to walk, their work capacity would have to be INSANE. Naturally, this is what I will try to accomplish before leaving Paris. It costs 4.50 to get through the gate, so I won’t be doing this every weekend, but it’s a fun challenge every now and again.

Rather than walking all the way to the bottom immediately after getting to the top, Niels and I hung around, enjoyed the view, and eventually ran the top half of the climb again. This ostensibly brought our total stairs climbed to around 900. I included a short video of the mornings activities below.

Posted by anywherefit at 6:57 PM