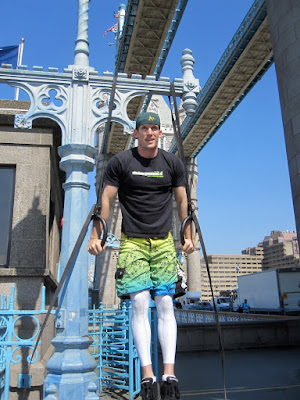 BIG day today. Was up and out of Oxford by 9:15 this morning, heading east on the train to Paddington Station in London. After a few unsuccessful ventures into sporting goods stores looking for Olympic weightlifting shoes, I met up with Dellus, Rob, and Jami (Owner of CrossFit Thames) at London Bridge Station. We headed toward the tower bridge and settled ourselves in a new age amphitheater just in front of the mayor’s office along the river. The four of us had plenty of spectators during the lunch hour WOD, even competing with an impromptu 3-man theater performance for crowd attention at one point. The workout itself was grueling. Jami and I went first while Rob and Dell filmed/stretched. Because the elements were so short and light, this turned out to be a real burner. We flew out of the gates and had 3 rounds done in the first minute. That pace didn’t hold up, but I did manage to finish with 21 ½ rounds (262 steps jumped/252 stairs crawled). My ankles were fatigued but not in pain, and the main area of exhaustion was my hips and my lungs. Jami finished with 18 ½ rounds, Rob with 17, and Del with 15. The video is below.

From there we walked across the Tower Bridge where we each did a ceremonial muscle up (pictured above) then along the river past London Tower Prison. We crashed at Starbucks for 30 minutes or so before continuing on to a park near Del’s house. We hung up the rings in a friendly tree and, 1 at a time, took our best shot at a post-bearcrawl 30 MU’s for time. I don’t remember everyone’s times exactly, but I think Rob was just under 7, Jami just over 6, Del just under 6, and I was 5:18. I tried to strategize, doing 5 at a time then resting 30 seconds before going on. This worked until 18, when I started to lose the false grip between reps. I got to 20 at around 3 minutes and just started doing singles from there. I missed 2 in the last 10 and ended with a time that I think could be better.

After the park, Rob headed home and Jami, Del, and I grabbed some food at the market to eat before heading over to CrossFit Thames for the evening. The space is nestled in London's financial district of Canary Wharf, just around the corner from a beautiful row of waterfront pubs and restaurants. It's young, spartan, and ready to boom. I wouldn't be surprised if Thames outgrows its current space by the end of the summer.

We got in just before 6, so Jami had to start coaching right away. Del and I hit the squat rack, hoping for anything positive after all the jumping and crawling earlier in the day (not to mention car pulls yesterday...)—both of our legs were starting to feel it by this point. For me, this was a good thing because having to lift heavy when tired is going to happen at the regionals so I need to train for it. We both cleared 170 kg before missing 180. Not really a huge surprise being weak here, so I was happy I got what I did.

Afterwards I practiced finding my rhythm on chest to bar pullups using a gymnastic kip. I probably did 10 sets or so, trying different swings, grips, and tempos. Overall things felt pretty decent, but not perfect. Really glad I did it and need to work more in the next 2 weeks to keep it fresh.

I’m resting tomorrow before my boy John comes in from Sacramento. In fact, he might already be on the plane. He’s a firefighter and loves to work, so it’ll be a big couple weeks with him around.