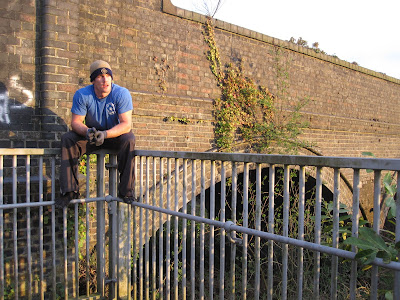 If there’s one thing I’ve learned during this trans-national adventure of mine, it’s that there is nothing like training out in the open. Urban environment or rural environment, city street or barren trail… get outside and train without walls.

Some might argue that cities, by their very nature, don’t lend themselves to physical exploration. They’re lazy. Some say the countryside encourages accessibility, freedom of movement, and an exploratory eagerness that cities do not. Maybe it’s not our environment that cultivates these characteristics in us, but we that find it in them. There are no objects in nature whose equivalent can’t be found in a city if you’re looking with open eyes. Mountains are just nature's staircases, trees are her climbing walls. Carrying a bag of cement is the same as shouldering a fallen limb, and lifting a stone is, well, you get the picture. The point is, just because most of us live in cities doesn’t mean we are bereft of outdoor fitness potential. Usually it just means we’re addicted to air conditioning and the comfort of what’s habitually easy. But I digress.

The main objective of this post is not to argue the pro's and con's of the urban/rural life, but to highlight the importance of forging a connectivity with our surroundings wherever they may be. That, more than anything, is what fitness boils down to in my opinion: How capable are you of engaging and mastering challenges in an unpredictable physical world?

Answering this question in the current climate isn’t so easy for many of us. After all, a great challenge in someone’s physical world could be changing the filter in the coffee machine. Most people proudly spend every ounce of their energy avoiding physical challenges, as though that were the rightful culmination of the experiment known as modern civilization. Here we stand on the shoulders of our ancestors so that we no longer have to stand. Let us, for the sake of my sanity, disregard this perverted idea of evolution as the purest form of rationalized lethargy and, instead, engage with a world where physical challenges must be overcome by individuals whether they like it or not. What then?

First, there’s the problem of gyms: people measuring their fitness by a standard that has no practical authenticity. Gyms are a simulation of reality. A very valuable simulation, I grant you, but a simulation nonetheless. They plug the gaps when the weather is bad, help to build bases of strength and conditioning for athletes and the de-conditioned, and assist in training specific movements that must be practiced again and again to perfect form and technique (rehab/sport). These are all great uses, and if this is how you see your gym I have no objection. Unfortunately, the vast majority of people view their gym as a fitness mecca, the only place where their quest for beauty, strength, and discipline can endure and be validated. The image of a dog chasing its tail comes screaming to mind. In reality, gyms are a crutch on which we lean too heavily and quickly become dependent upon. Largely, this is because they are controlled environments and are grossly convenient. They’re also expensive, sterile, and largely devoid of practical usefulness once you leave. Globo Gyms, CrossFit Gyms; every kind of gym is merely a tool with which we build fitness for a life outside their doors, a life filled with broken elevators, dead car batteries, and the occasional evasive maneuver. That life is variable, it’s non-linear, and it rarely comes with chrome-plated barbells. If you never train strength, speed, agility, balance, power, accuracy, etc. in the environments for which they are necessary, what good are they? Life, as it were, happens everywhere. Act accordingly.

Beyond the logical reasoning outlined above, there’s also this: training outside is a far more satisfying experience. Remember that connectivity I mentioned earlier? It’s real and it only happens when you get out and start interacting with the rest of the physical universe. I cry for the individual who runs 5 miles a day, 5 days a week, and never gets a sunburn. I pity the man who does endless pullups but never gets to see anything above the bar. It’s the totality of the experience that makes outdoor training different, and it’s something you cannot simulate. When you’re outside there’s endless sensory input: wind, noise, temperature, visual space, etc. There’s constant variation in the tools you use, be it bags, beams, bridges, walls, ropes, hills, cars, or people. An environment with this much possibility literally stimulates creativity and breeds confidence in the individual’s ability to overcome all things. The more stuff you use and the more tools you touch, the greater the connectivity you create and the greater the belief in your own ability to master your surroundings. Such is the ultimate brand of fitness.

In short, these thoughts boil down to this: Be it urban or rural, fitness is only as measurable as it can be applied to overcoming challenges in the randomized physical world around us. And, while controlled environments are useful, even necessary to preparing us for this world, they are not the most critical proving grounds. The extraordinary satisfaction we get after conquering natural obstacles and the totality of the experience in general are proof of this fact.

Don’t believe me? That’s okay. Keep chasing that tail. I’ll be out back whenever you’re ready.

Posted by anywherefit at 2:29 AM